The Burn Over Part II

This had been a stubborn fire.Not much had gone our way and the news from our fire base that we still didn’t have our grocery order hadn’t improved morale.My Helitac crew had been split in two to manage the new hires and probable arsonists.It brought the total ground force to 18 men. I could tell things were not going too smoothly on the ground. The two hand held radios were unusually active. It was all in Cree but there was a tone to Alberts voice that indicated frustration. My last trip back to our main base for fuel, Albert had asked me to pick up a carton of cigarettes. Nobody on our Helitac crew smoked so I knew Albert was asking on behalf on some of the new hires.
” Not enough smoke on the fire for your newbees? “I asked Albert. He just chuckled over the radio,paused with the mike keyed and probably thinking better of it,said nothing. 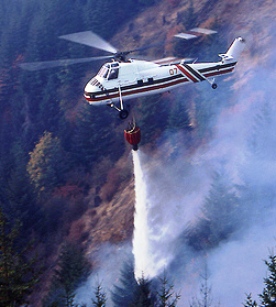 Back at our base landing with the S-58 I could see the company engineer had some fuel drums rolled out with barrel slings attached and another few drums stood up with a pump inserted and ready to go.
It would be as quick a turn around as we could handle. The last two trips into the fire had been all equipment. This time we would fuel up, load our extra Bambi water bucket,and sling the drums out to our helispot near the fire. Jim, the engineer would be coming too and I sure appreciated his help. Man handling fuel drums and a Bambi bucket in muskeg ground was no fun by yourself.
Steve, the Ranger came over the radio to tell me that he thought our groceries would be here in a couple of hours. We had been eating canned Spam, Klik and white bread and canned peaches for the past two days.My Helitac crew had said screw the lunch meat and used it for bait to catch some nice Northern Pike,add some rabbit and what looked like roasted venison and the boys were not suffering too badly out at the fire camp.
Jim and I were off to the fire with the all important carton of cigarettes and some extra chain saw gas.
We had enough fuel for 4 hours plus, so our next run back to base would be late afternoon for fuel, groceries and who knows, maybe snuff.
We arrived over our helispot on the fire and after setting the fuel drums over by a growing pile of empty drums I put us back in our wheel marks in the driest spot I had found in the muskeg.
Jim looked around a bit as we sat cooling down the big radial engine. “I know what your thinking Jim”, I said. “This helispot is pretty close to the fire and there is nothing for a firebreak between us and the fire”
“There just isn’t much choice here, its wetter muskeg behind us, a couple of lakes and the hill the fires is running up” “Thats it”
“Well buddy”, Jim said, “that fire shifts this way and you try and remember that I am sitting down here with nothing but fuel drums to keep me company”
“Why don’t you just fly with me Jim; less black flies and another set of eyes is always good”.
“Agreed,Keith”
As the afternoon progressed we had started to get a pretty good line around the fire and the close proximity of a large lake near my helispot was allowing me to get a lot of water where Albert and the boys needed it. At least I figured it was where the crew needed the water. They never asked for any drops. I went about my business and they went about theirs. An occasional wave or thumbs up was about all I ever saw from Albert or the others after a drop.
Jim and I had decided to do a couple of more drops, grab the last of the fuel and net up all the empty fuel drums for our next run back to the base. The empty drums were starting to crowd our little swampy helispot and I was concerned I was going to blow some into the creek that ran to the lake.
Off to the east I spotted a gray/green line of clouds. A squall line and it was heading our way fast.
“Lets start thinking about Plan “B” Jimmy. “This storm doesn’t have any rain under it and its going to bring a 180 degree wind shift when it gets here.” Forget bringing the drums back it will be too slow going.
I called Albert and told him that we were going to get both our buckets tossed in the ship and throw some fuel on quick. “Did you want me to start hauling your crews over to that rocky point on the other side of the lake, Albert?”
“Nope” came back on the radio.
“Well,you know this squall is gonna send that whole right flank back down the hill to where I am landing and there is nothing but muskeg up to your nuts on the other side of this creek”
“Yaw”, Albert chuckled. “We won’t be goin’ that way,we- are- good”
It was about the longest sentence I had ever heard from Albert. As Jim and I hightailed it for the base I had the old S-58 bent over going fast.
I didn’t like leaving but we were out of fuel. We would turn around as quick as we could and get back.
With the helicopter fueled and some fuel barrels rigged we tossed the last of the groceries on board the S-58 and got going. There was no radio commo between the base and my crew but we had heard a lot of Cree over the radio flying back to the base an hour ago.
I started to worry when we were half way back to the fire. There was a big smoke column coming up and the squall line was well off to the west.As soon as I thought we were close enough I started calling on the radio for Albert,then Ely, Noah and finally, anybody on this frequency? Jim looked over at me and and said, “maybe their busy”
“Busy running for their lives except you can’t go any where in that Black Spruce muskeg”.
“Maybe they went to the creek”.” Well, Jim. that creek will be burning along the sides hot and floating crap coming down from the fire will be choking it”
“Jesus, I should of just taken them outta there and across the lake to that rocky point”
Several more calls on the radio produced no answers and as we overflew the helispot I could see it had burned fast and hot almost down to nothing. There were a few scorched fuel drums and where were the others had they exploded and launched? I was feeling sick. 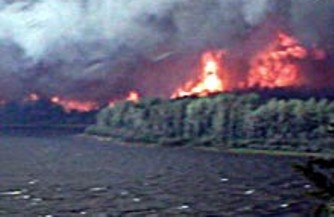 A call came over the radio. Hey, ALA, (my call sign), you lookin for us?
“YES ALBERT, where are you”?
“We are doing some rafting on the lake,oh, and a little swimming too”
Flying over the lake we spotted the missing fuel drums,lashed together with our nets and all tied up with fire hose. Coveralls, tools ,pumps ,hose rolls, clothes,tents and bags sat dry in the middle. Naked, smiling and waving all 18 men were there and Jim and I couldn’t stop laughing as I set our fuel drums down at the new rocky point helispot.
Flying back out to the raft, Albert had his jeans on now and keying the hand held radio, said “do you think your big- wind- machine could blow us over to the point?”
” We would be happy to Albert” ,”Happy to”.

8 Responses to The Burn Over Part II