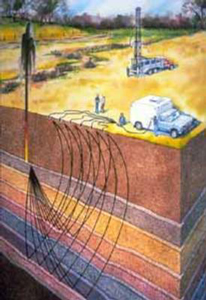 My teeth were chattering in time to the clacking diesel pickups idling behind us in the Motel parking lot. Thirty of us stood backs to the wind waiting for the morning safety meeting to begin. The wind whipped a combination of dry snow and grit across the back of my neck.High desert winter in the dark and the six thirty meeting should have started five minutes ago. I walked back to my truck grabbed my coffee from its warm place and almost climbed in with it.
The bosses were gathering outside as I got back and things were quieting down. Manulito called over to me.
“Ay Keith, Que Paso?” “Mucho pinche frio,amigo”, I answered ,which got a few laughs from my all Spanish speaking coworkers.Our seismic crew were from Texas officially but that basically meant the bosses. The men working the lines were, Mexican, Guatemalan, Salvadoran,Panamanian, Ecuadoran and so on. Illegals, with the appropriate documents that wouldn’t stand up to any real scrutiny from immigration.
It had been a worry for a lot of the men when we worked a job back in south Texas but up here on the Red Desert of Wyoming it was no problemo.
The meeting started with the usual monotone drawl from our boss about being behind ,picking up the pace and paying more attention to geo phone placement in the ground.
To the unsuspecting other Motel guests who had checked in yesterday afternoon and were now privy to the morning briefing it was probably just so much noise they hoped would soon go away.
Todays briefing would include a talk from our new medic freshly hired out of Denver. He apologized for not speaking any Spanish but would talk slow. Oh yes, please do, I thought.
Eyes rolled,men kicked their boots together and the medic spoke about the importance of proper hydration and guarding against hypothermia. I half listened and looked around at the men. Bored and cold, one of the new guys I could not remember his name was entertaining himself by finger flicking the ear of the little Salvadoran standing in front of him. Back off, I thought. This Mexican kid looked like a gang banger from Houston ,up for some quick money and avoiding any outstanding warrants back in the city.
The medic was detailing the color of properly hydrated urine to men who had just now figured out he was talking about the color of their piss.
” So ,your urine should be almost clear or light yellow or light green”, the medic added.
“Green?” one of the men spoke up. “SA ,your pees green and you better check what else is dripping out the end of your dick”.
That got us all laughing and with the boss thanking our new medic for his talk, ended the briefing.
I heard the unmistakable thump of someone getting gut punched. Turning back I could see the new kid doubling over on his way to the ground. His head hit the gravel followed by a soccer kick to the face.
Over in a second and little Carlos from Salvador was grabbed before he could get into one of the trucks.
Our medic had his first customer and after a short explanation by me, Carlitos was back to work.
The kid from Houston would be the head bandaged passenger on the Greyhound bound for the hood.
Our seismic crew of maybe forty men made up a small part of the total effort. Seismic exploration sometimes involved hundreds of people and the size of the area explored could be anything from several hundred acres to several hundred square miles. Helicopters played a role in almost every aspect of remote land operations and my job was working with the layout and trouble shooting crew.
In the simplest terms we were the folks that laid out the geo phone lines on the area to be explored.When you are looking for oil its not by guess and by golly. Oil companies want to have an idea what is under that dirt before they start drilling. Technologies have improved over the years ,so that often oil companies come back into areas with known oil reserves, to take a new “look” under the ground.
To the men I supported and flew around it was even more simple than that. Every day the layout crew would have a forced march through the frozen mesquite covered ground of southern Wyoming. Six miles out and six miles back on average, at 6,000′ with temperatures well below freezing and the relentless wind never let up. If it wasn’t wind across the desert it was wind from my helicopter blowing down from a hundred feet above.
Walking from one pin flag to another hammered into the hard ground the crew would reach one of the hundreds of bags I had flown out ahead of them on the line. In each large vinyl bag were cables to be set out and hooked up to boxes and geo phones that were stomped into the hard surface, The geo phones were like tent spikes attached to cables that fed their sensor information to the antenna equipped boxes.The boxes would relay their under ground sensing information back to the recorder. When enough lines were laid out on the grid ,a series of shock waves created by either explosive charges drilled into the ground or seismic shaker trucks would allow the under ground information to be processed for that area.
With explosive shots taken and information recorded the whole process was then done in reverse.Equipment was picked up and put back in the bags and flown back to staging with the helicopter.

At staging the bags are emptied,equipment checked,cleaned and packed again to be flown out on the new lines. Ad infinitum.
In the next blog, I’ll tell a few seismic stories of days past.

Has it really been forty-seven years flying helicopters all over the world? I guess it's time to share some stories, I hope you enjoy my adventures.
View all posts by Heligypsy →
This entry was posted in Contract helicopter pilot, Flying Stories, Helicopter Pilot, RV Travel and tagged Helicopter flying, Helicopter Pilot. Bookmark the permalink.