Its the term used to describe wildfires that run into densely populated areas.I have fought a lot of these types of fires over the years and the number one rule, just as it is with physicians, is first, do no harm.

I wish we were always successful in that regard and thankfully I have yet to hurt anybody on the ground. Its hectic fighting fires in a city or town and the public often gets involved on the ground. When you fly a large helicopter like the SkyCrane you may be dropping as much 17,000 lb.s of water on one drop. If the drop is concentrated for effect you don’t want to be under that kind of water or retardant

I have written a couple of previous blogs on firefighting in this environment. You can check them out if you wish. Both firefighting blogs are set in Greece but similar situations occur almost anywhere in the world.

Here are a couple of previous blogs:

Holding The Line and The Last 10 Days 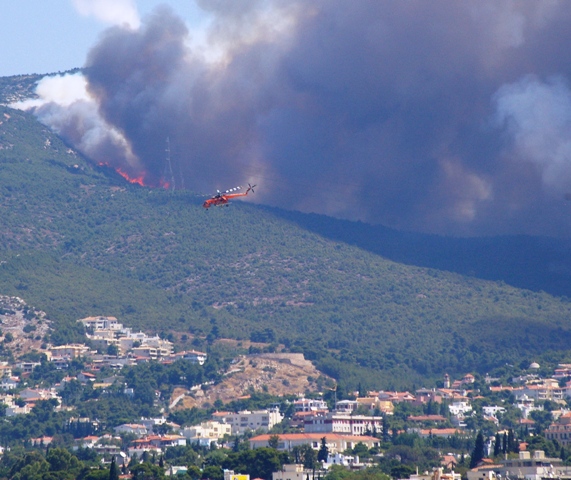 When you fight in town fires you have to be prepared to handle things a little differently than you would back in the woods. Over the past years I have sent drops through the roofs of houses,through the front window and out the back. I have blown the flaming patio off the back of a house and sent several drops through the doors of  flaming barns. I’ve spent a half hour wetting down a tethered horse in a pasture while the owners house burned beside the corral. Its my call.

There are some urban fires running in California right now. Some friends are doing their best to minimize the damage. Houses will be lost and lives changed. A few folks will say that the firefighting was heroic and some will say that is was mismanaged and poorly handled. There will be some truth in both statements. Its an emergency and good and bad things will take place.