My passenger was not barking anymore. He never liked it when I hovered down wind. Too much exhaust blowing into the cockpit through my open door. Long lining drill support equipment with my little Bell47T meant that I sometimes had to face down wind flying things like core sample boxes off the sides of the mountain.

Pilots like to avoid placing their tail in towards the rocks as they sling items off mountain sides. Back up a little too far and you can ruin your whole day. A little exhaust is a small price to pay but its not easy to explain to your passenger, especially when he is a Golden Retriever.

Besides slinging any manner of equipment on this drill job, I moved all manner of personnel. The Bell 47T was used primarily for its overrated slinging abilities and the other helicopters moved more people than I did, because they could. There are only two passenger seats in the Bell 47.

One day as I flew into the camp helipad to pick up the camps carpenter I noticed his dog running back and forth off to the side of the helipad. Could the dog come too, he asked as he leaned in to shout over the noise.

Sure. Why not. With Buddy sitting comfortably between me and the carpenter whose name I can’t remember we headed off to the mountain top helipad and the staging area. When we got to the helipad, Buddy took one look at where he was going to be going and decided he liked his new arrangement. Ok, then.

I hooked up my line with the controls frictioned and Buddy sitting patiently till I got back in and off we went. We spent the rest of the morning slinging equipment and core boxes. Buddy would hop out when I refueled, take a leak get a drink and hop back in. A week later the carpenter was done his shift and the camp boss told him that the dog was not welcome when he shifted back in. Too bad.

So, yes, it was not the most responsible thing to have done flying around with buddy. It was the eighties in the far frozen north and a whole different world. I don’t let dogs ride up front anymore.

Oh, and they are always on the leash.

Our friend and fellow traveler, Zoe. 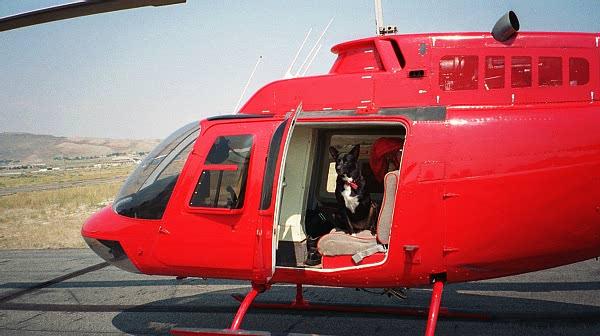 Has it really been forty-seven years flying helicopters all over the world? I guess it's time to share some stories, I hope you enjoy my adventures.
View all posts by Heligypsy →
This entry was posted in Flying Stories, Helicopter Pilot, Random rantings and tagged Add new tag, helicopter, Helicopter Pilot. Bookmark the permalink.