It was dusk when we found a place to park our little motorhome near a riverside jungle resort. Our dog Zoey was out in the brush sniffing around at the hundreds of smells she didn’t recognize.

I can only imagine what goes through a dogs brain when she steps out of the familiar confines of her motorhome to be bombarded by the alien smells and sounds of a world she has never experienced. A few days earlier we had arrived in the near dark at a campground in the Mayan jungle highlands of Mexico. Zoey was out of the motorhome sniffing and listening as we sat in our lawn chairs in the relative cool of the night.Parrots were squawking as they found their last roosts and a dozen other bird types called to each other from the trees overhead. I didn’t recognize many of the birds and the tree frogs were making sounds like little alarm clocks. All was good with Zoey until the first Howler monkey said goodnight. Zoey’s ears went back and she looked at us as if to say,what the heck was that ? Dog patrol was officially over and there would be none of the usual barking at what ever had made that noise. Zoey placed herself by our feet and looked from us to the motorhome.Resigned to the fact that we were not scurrying inside she laid low in the grass with her dingo like ears rotating like satellite dishes.

It was the same story tonight at our jungle side camp in Belize. Zoey would be more than happy to stay in the motorhome while we walked over in the dark to sit by the pool. 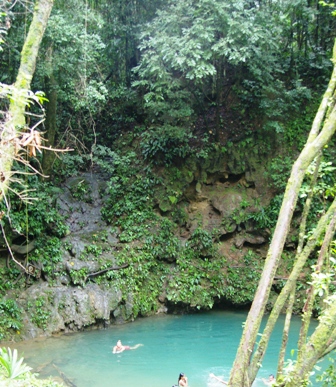 It was our first visit to the Cayo district and so far we liked what we saw. No sand flies ! Rivers, jungle ,mountains and at this resort ,a huge pool with a 10′ deep end. As we chatted with the resort owners bats flew in and around the poolside restaurant and bar. No bugs in the air. Lizards climbed on the upper walls and table tops. No bugs on my head and now none on my upper body. Perfect. About the time I started to think about my bare legs I caught sight of it.A toad the size of a small cat.Wow,thats a big toad I said to our hosts.

No its about average they said. you will see some big ones soon .They like this location because the lights attract the bugs and the hunting is easy. About then a firefly glowed near my leg. A millisecond later ,about 10″ of tongue had grabbed the firefly.

I jumped in my seat as the toad swallowed and I half expected to see its eyes start glowing . My host glanced over as I shifted myself in my seat. Glad to be wearing under wear I said. Paula gave me the look, but fortunately our hosts laughed ,probably out of sympathy for Paula.

We talked about the wildlife we had seen in just the past few days. Manatees ,sharks,rays, a crocodile, monkeys,paca,iguanas everywhere,lizards and birds of every colour,including the Jabiru a stork with a 7′ wing span Toucans and Toucanettes.

We had not seen Jaguars in the wild yet,but Jaguar tracks along the river on the way to exploring a sacred Mayan cave.

It was a cave and cavern that had us swimming upstream in the dark with just little miner lights on our helmets to light the way. But thats a story for another blog. Lots to see in the wild here and so much to learn about the medicinal plants, the hundreds of birds and more sea life than a Cousteau special.

Has it really been forty three years flying helicopters all over the world? I guess its time to share some stories, I hope you enjoy my adventures.
View all posts by Heligypsy →
This entry was posted in Belize, World Travel. Bookmark the permalink.