From Hot to Cold

Hot air blew on the backs of my legs as I flew my Bell 47 G3B-1 back to the airport that early morning. At 05:30 the hot air seeping into the cabin had been tolerable but now with the morning sun beating in the big bubble it was hot, too hot! 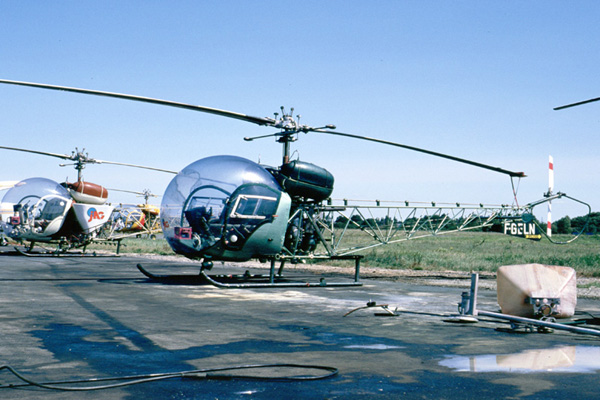 I landed at our base and shut down after the 5 minute “cool down”. It was the engine and turbo charger that were cooling. I was sitting sweating with my helmet off and my head in the rotor wash hanging out the door. The mechanic was busy positioning the fuel truck and pumping some toxic mixture of Baygon and I can’t remember what in my spray tanks. The mission was to apply a mist of death over the areas where adult mosquitoes were sucking the life blood out of the local residents. I flew in the early morning to minimize the amount of people I sprayed in the public parks and golf courses around the city of Edmonton Alberta. I still managed to spray a lot of people and for that I am sorry. For those of you I sprayed as you played golf, jogged or hiked, perhaps you could  take some consolation in the fact that I got more of the chemical on me than any of you will in ten lifetimes. I am at this point physically as healthy as can be expected and mentally sound enough to realize that Edmonton was a good place to leave.

The mechanic and I discussed my little over heating problem and with the permanent smirk he always wore around me,  proceeded to unfasten the heater hose that was plumbed into the cockpit. Our working relationship had gone  down hill over the summer and I would have to say that he was one of the few mechanic/engineers that I have not got along with in my career.If there are others of you out there and you are now shouting, “Oh Yeah,” keep it to yourself  and let me enjoy the allusion of being well liked and respected or at least tolerated.

I gave the mechanic’s work a cursory glance and then asked for reassurance that his tied off hose repair was not his best effort, just a temporary “fix” right?  The question was unnecessary, I was being a prick and would soon pay for my snide remark.

My next spray site was a ravine close by the airport. I pulled power rolling in more throttle as I climbed off the airport . Lowering the collective I dropped into the ravine and boomed on, spraying down the ravine. As I lowered the collective I correspondingly rolled the throttle back to maintain and not overspeed the R.P.M.  At the end of the ravine where a  little dry creek sometimes flowed to the river I boomed off and made a cyclic turn trading airspeed for altitude and reversed course up into the ravine. I boomed on again and pulled collective power while rolling in more throttle. Something was wrong with my throttle. I could not get any more throttle to roll in and and the climbing ravine meant I was losing R.P.M. fast. I  boomed off, did a quick cyclic climb with right pedal and went down the ravine skimming the tree tops while trying to force the throttle open some more. The throttle sprung back against my palm and I knew that I had all the throttle I was going to get and a whole lot less than that, if I loosened my grip.

Popping out the end of the ravine at the river felt good for a second but there was no suitable place to land. I could keep enough throttle held in for straight and level flight so I elected to bring the airspeed back to a best rate of climb speed and see if I could climb.I could climb just a little and so with that, I started a slow climb out of the river bottom and up to the altitude the airport was at. I called the airport and asked for a straight in to the base without delay.

The tower could tell from my request that all was not right in my world and asked if I had an emergency I wished to declare. I did but I didn’t and that was another mistake to add to the list. Fortunately for me, my run on landing back at the base simply resulted in my buddy the mechanic asking me if that was the best I could do for a landing?

The conversation went down hill rapidly from that remark. The heater hose had fallen in behind the throttle arm when I had reduced the throttle position and it was obvious the tie off on the heater hose had not held. The mechanic had been rushed into a “bush” repair and we both had known better.  In looking back I can see a whole series of  mistakes and bad decision making on my part.

It was a learning opportunity for the both of us and I am just as much to blame for what happened as the mechanic. In fact as the senior person on the job, I take most of the blame for letting an unsatisfactory working relationship degrade my professional standards and to allow a problem to go unresolved.We both learned a lesson or two.

The mechanic went on to become one of the companies best and I went on.

2 Responses to From Hot to Cold