Before the Seismic job begins

Seismic exploration for oil seems as cyclical as helicopter logging or mineral exploration flying using airborne magnetometers.I don’t know why these types of flying have so many, (bad pun), ups and downs. Demand,seems the obvious answer, but its not just that and frankly if I was smart enough to understand how that all works, I wouldn’t be flying helicopters. I most certainly wouldn’t have found myself in some of the most remote and inhospitable places in North America hanging out the side of a helicopter staring down a 100 to 200 foot line.
I have spent a good portion of my career hovering with a carousel full of seismic bags or an ATV or a drill or a box of dynamite and looking down the side of a mountain at no place big enough to land a helicopter. About a quarter of my career has been slinging things and probably a quarter of that time has been spent in a portion of the flight envelope that helicopter pilots call dead mans curve.
I mentioned in a previous blog about seismic exploration with helicopters that seismic flying is most often divided into layout and trouble shooting support and/or drill move and drill support.
There is also a good chance that helicopters may have played a part in the seismic operations before the job even began. Aerial magnetometers are flown over the landscape to detect magnetic anomalies under the earths surface. The information from the magnetometers is used to determine if oil reserves or anything else of value such as minerals are present in large enough quantities to warrant further exploration.
Magnetometer flying with a helicopter is a not so much vertical reference work,( long lining) as it may appear. The magnetometer which can often resemble a missile, is flown on a line some distance below the helicopter to get it clear of interference from the helicopter in some cases. 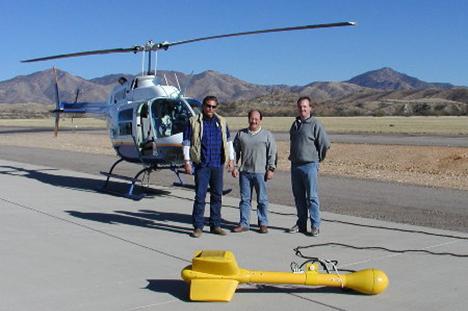 The magnetometer is flown over the area to be surveyed in a grid sequence flying within very tight parameters. The lines to be flown are often duplicated and the pilot needs to fly his or her helicopter and the load below with precision.Typical “lines” are flown with airspeed within 10 kts, altitude within 100′, while maintaining a track over the ground that keeps the helicopter within 20 meters or 60 feet of the desired track. Not so hard over flat ground in light winds. Throw in some very steep mountainous terrain that could exceed the helicopters climb or descent profile,add a gusty cross wind and very uneven terrain and you are working hard to fly the line.Remember any out of trim movement can get the magnetometer swinging even if the helicopter is flown perfectly straight.
Now fly about 100 lines and you have the equivalent of about 200 instrument approaches each day for the degree of concentration required.
The pilot needs to keep a difficult scan going flying a magnetometer. Outside the pilot needs to be aware of all the things a VFR pilot needs to look for and at the same time see and anticipate sharply climbing or descending terrain. Did I mention that the magnetometer is often flown less than 200′ above the terrain. Makes that 100′ parameter more critical now doesn’t it ? The magnetometer may be worth a million bucks and there are seldom spares on the job even if the customer was willing to let you have a crack at running another one into the rock face.
The scan is out and back in on your instruments to stay within the parameters. Very accurate G.P.S. coupled to a light bar keep the aircraft as on line as the pilot can manage. An instrument scan is hard enough to maintain inside on instruments, now break your scan to cast an eye outside to start leading the power and airspeed and you can see that it takes a lot of concentration. I have two pilot friends who have been doing this work steady for 30 plus years and about 20,000 hours each. I have done a few hundred hours of it and to them I say, good on ya !
I realize that this blog was some what technical in nature and lacked personal anecdotes. Sometimes a bit of background is needed. In following blogs when I start telling stories about seismic portable drills, grids, recorders, mags, jugs, shaker trucks,dynamite, drillers,jugheads and trouble shooters etc.. it may be a little easier to follow. Even with all that I may have to post a seismic glossary of terms both technical and slang. Or just give up? I’ll try!

Has it really been forty-five years flying helicopters all over the world? I guess its time to share some stories, I hope you enjoy my adventures.
View all posts by Heligypsy →
This entry was posted in Flying Stories, Helicopter Pilot, Random rantings and tagged helicopter, Helicopter flying, Helicopter Pilot. Bookmark the permalink.

1 Response to Before the Seismic job begins