Those of us who choose to write about our flying misadventures run the risk that their audience no matter how few they are, may decide, that you are in fact ,a moron. By way of a very limited defense, I say,that my stories have all accumulated over a 34 year career,flying, fixed wing and helicopters. I have mostly flown helicopters and 99% of the time in a safe and sane manner.

One of my favorite sayings goes,”that if you can’t set a good example ,at least be a horrible warning”

This happened to me a long time ago, when I let a chain of events build to the point that it almost bit me ,in what might have been described as my dumb ass.

I owned my own helicopter and like a lawyer who defends himself the pilot/owner who does his own running maintenance may have a fool for a client. 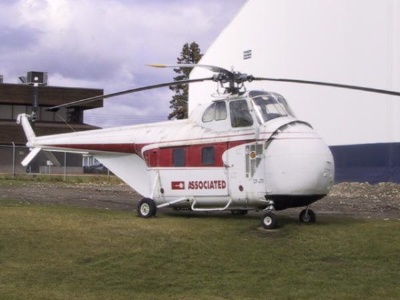 My helicopter’s wheel brakes had a small leak somewhere and occasionally I would lose brake pressure. I added fluid and purged the brakes to keep them working but so far I had not figured out where the problem leak was located.

This day I had flown into a Northern FBO .(Aircraft fuel station) and the voice on the radio had told me to taxi to the ramp area in front of the building adding that he was fueling an airplane elsewhere and would be back in a few minutes.

I taxied in and parked in front of the fueler’s office .I could see several people looking out the large front windows of the office as I set the brakes and shut down. The engine coughed to a stop and the rotor began slowing as the helicopter began its backward roll towards the office.I pumped and reset the brakes but to no effect.There was nobody around to place chocks against the wheels and my chocks, were in the back below me. Getting to those chocks  was the only thing that was going to keep my spinning tail rotor from making a spectacular entry through the office window.In the two seconds it had taken me to decide my course of action I had unbuckled my seat belt and slid my window back. It was about 5 steps down the side of the fuselage to the ramp about 8 feet below. I swung my leg over the side window sill as the helicopter began picking up speed on the downhill.I didn’t have much time and in my haste my foot slipped out of the step hole in the fuselage. I would have fallen but my other flight suit leg hooked on something as I went down, allowing my helmeted head to gong off the side of the fuselage. A second later my flight suit ripped clear allowing my upside down flailing body to hit the ramp.

Leaping to my feet I ran to the door slid it open ,grabbed the chock and slid it behind the wheel. The helicopter wheel rolled up the chock but not over and the opposite wheel settled into a storm grate . I looked back at the tail rotor that had been stopped by the rotor brake I didn’t  even remember setting. The tail rotor was only a few feet from the window where not surprisingly no one now stood. In fact about four or five people were streaming out the front door and ran towards me.

Everyone stopped ,looked at me and then almost in unison at the tail rotor and then back to me. Not a word was spoken. Everyone looked like I felt minus the sore shoulder I suppose. I shrugged my  shoulders and said, “Well, so, what do you think of me so far ?

It was a rhetorical question.

Has it really been forty-seven years flying helicopters all over the world? I guess it's time to share some stories, I hope you enjoy my adventures.
View all posts by Heligypsy →
This entry was posted in Contract helicopter pilot, Flying Stories, Helicopter Pilot and tagged helicopter, Helicopter flying, Helicopter Pilot. Bookmark the permalink.