Dew Point. This is a measure of the moisture content of the air and is the temperature to which air must be cooled in order for dew to form. Like clouds, fog is made up of condensed water droplets which is the result of the air being cooled to the point (actually, the dew point) where it can no longer hold all of the water vapor it contains.

Most meteorology study is dull reading until we find ourselves flying a helicopter in close proximity to the unforgiving terra firma when the above weather situation is happening.

Some stories where the temperature and dew point met, fog formed and the frightened pilots were certainly not bored. 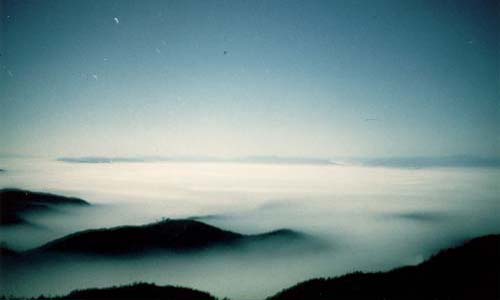 Drizzly rain on the steep mountain side. Its cold and getting colder. The hookers on the hill have had it. It is a a tough enough job balancing yourself on a wet log where a slip and fall will put a broken branch through you, or a leg snaps between logs laying twisted below you. Add a helicopter now hovering 200′ above you and blowing a wind down in excess of anything a normal person would endure. The rotor wash is whipping the water down past your collar and the static charge if it hits your hand before the long line hook touches the log, will buckle your knees. You put the log chokers in the hook and call clear running off the end of the log. Cold dangerous work.

Its warm and cozy in the helicopter though. In fact the copilot has cranked the heat up a touch and redirected the pilots fan to help him keep the bubble window clear . The windows are not staying clear and the cut out in the bottom of the pilots bubble window is the only semi clear look the pilot has down the line to the logs he is pulling off the ground. The last log is off the ground and as the helicopter moves forward and down the pilots sees the same thing the copilot sees.

White below where the logs are moving at 80 mph clear of the hill for this second, hopefully. The helicopter is descending rapidly and straight down the pilot can just make out the logs that he has caught up to, and the ground below those logs.

“Lets just put these on the road and go” the pilot says.

The copilot only responds with a call to the service landing.

“Service, how is your weather?” He hopes his voice didn’t sound as shaky to them as it just did to himself. It is somehow important not to sound shit scared just before you die.

Logs tumble along the road as service answers on the radio.

“Well, like I mentioned a few minutes ago its getting pretty foggy but we can see some light straight up and the service landing is visible, all the way across.”

The joke sounds flat and everyone knows the pilot is as scared as the copilot. The copilot is thinking what is all this “we” and “us” bullshit. I am just along for the ride and if I die with a dry crotched flight suit it will be a miracle.

The helicopter hook hits the ground and rolls a couple of feet. Not the usual smooth hook touch down into service but either is the landing a minute later. The pilot is just a tad stiff on the controls as he sets the wheels down and throttles are idled back.

“Lets not do that ever again” the copilot says.

“Roger,” comes the choked reply from the pilot.

It has been a long day turned into night. Thirty minutes more cruising offshore back to the coast, land, paper work and its beer thirty and a shower. The wind has dropped, the G.P.S. shows a lower ground speed and it looks like you might be just nibbling on your reserve fuel as you hit your airport on the coast.

Speaking of coast, where did the lights on the coast go? It is a rhetorical question. A call to the tower confirms what you don’t want to hear.

“The airport is zero zero sir, your intentions?”

“Let me call flight service and I’ll get right back to you” the pilot replies.

A quick call to flight service confirms that an airport 9 miles further inland is clear, light winds, a fog bank 6 miles to the west and a temperature dew point spread of only 2 degrees.

One more quick call to company dispatch at the coast airport.

“I was just going to call you. What are your intentions”?

“A popular question tonight” responds the pilot. “I am proceeding to Pleasantville airport and will fuel there. I’ll call you landing Pleasantville.”

A few seconds later the familiar voice of the owner and chief pilot is on the company dispatch radio frequency.

“You know if you pick up the river where it hits the coast you can cruise in low level to the edge of the airport, hop the fence and you’re home. Its a Part 91 flight so the tower can not deny you a Special VFR clearance”, the boss continues.

” OK, I’ll try that”, says the pilot. (because I am STUPID) he thinks. A reluctant sounding tower grants a special v.f.r. clearance and the fun begins. The river is about where it should be and hovering up stream in the fog is going ok except for that pesky fuel low light. Tower is asking for a position report because he has no doubt seen few aircraft approaching at 15 m.p.h. and not visible on radar. The pilot for a millisecond thinks about reporting adjacent to the Marina and looking eye to eye with a half dozen stunned boaters dockside. He decides against it, should that in fact be his last report recorded for posterity. “Showing 2.2 miles north” comes the pilot’s terse reply. “Report the field in site ” is the towers response. Love, too thinks the pilot. but he gives an”affirmative” as his answer about the moment he thinks about that fence on the airport boundary along the river. There is a power line along that fence he remembers, and its low. He is about the right point along the river according to the G.P.S. that he can only quickly glance at. There is the fence and above that in theory, is the power line. He can almost make out the line at times and so here we go from the hover,straight up forward ,hopefully over and down slowly. the ground should be in sight and is but at a funny angle. Straighten the helicopter pull an unknown amount of torque and level just above the grass.

“Airport in sight” the pilot transmits in a high pitched tone. “In sight” comes the reply from the tower. “Cleared to hover taxi, from your present position to the ramp” Ramp not visible from the tower, land at your own risk and report down and clear”. The pilot acknowledges the quasi clearance and lands on the ramp beside Chief Pilot who stands arms folded with a big shit eating grin on his face. The chief pilot leans into the cockpit and shouts, ” Thats the way we do it”!

“Like Hell it is”, the pilot screams back. The startled Chief Pilot, shrugs his shoulders and walks dejectedly back to his office.

This guys not gonna work out here, the Chief Pilot says to himself.